Paintings are usually composed of a foreground, middle ground and background ( close, near & far), with of course a focal point. It’s all about obtaining a balanced composition. What happens when there’s only a focal point?

Lately I have been working on a series of paintings that are simply subject (object) -based. The emphasis is purely on the subject with no reference to anything in front or behind. This has been an interesting challenge. The focus is purely on the featured object which when finished is ‘floated’ inside a frame – raised slightly, giving a three-dimensional look. 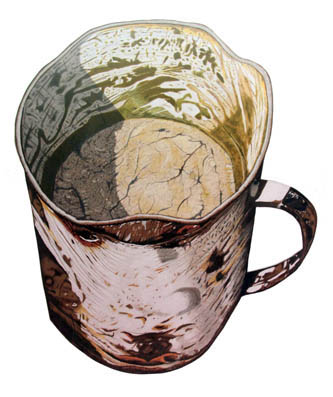 “Landscape Souvenir”, 112 x 85 cm, Prismacolors on pastel board, is the portrayal of a mug that I found on the historic property ‘Cheshunt’ in Northern Tasmania’s, Meander Valley. The property has been owned by the Bowman family for about 145 years and Paul, the current owner, let me keep the mug I found not far from a large shed that by the grace of God is still standing.

The mug is half-filled with soil, and there is rust and many a scrape and stain. What stories could this mug tell? We will never know, although judging by its state we can assume that it had an interesting life on the farm. Now it resides in my studio, away from the environment that it endured for many years.

I have completed 7 paintings that have featured this mug, but only in this one is the mug the sole feature.