THE CHANGE IS MADE

I’ve had a strong interest in digital art for the past 20 years, my love of coloured pencils 31 years. They have always been ‘well apart’ when it has come to my artwork. I’m passionate about coloured pencils and until recently I’ve championed them as a single medium.

When I left Tasmania last year, I took with me my entire collection of coloured pencils, about 3,000 (32 brands) and for the first 8 months while my wife and I lived in Cairns they were all I needed. In February we moved south to Port Macquarie and I began to think more broadly about the type of art that I’d been doing and where it was headed.

Buying an iPhone 7Plus late last year was a ‘game changer’. I started taking more photos than usual and ‘played’ with them to see what I could create. I’m experienced in Photoshop and a few Apps and it wasn’t long before something new and exciting emerged. But that was only the beginning, I wasn’t satisfied so I kept experimenting until last month I begin to see possibilities for ‘mixed media’ work and the first result is at the top of this post, with another (below) as a ‘work-in-progress’.

At last I’ve found a way of combining my two favourite mediums. I also have a passion for gouache painting and I will include this in some future work. But why make such a shift after 31 years of coloured pencil art?

The answer is quite simple. I can’t keep doing the same thing year after year in the same way. I know there are artists who do, but I get bored with too much repetition. I have deliberately tried to vary my approach when using coloured pencils; different themes and different styles. It was time for another challenge.

This new direction is a major challenge in more ways than one and it’s required a great deal of research and it will continue to do so. Each of my pieces will be unique in that they will be single edition prints that have been hand-coloured and/or hand-painted. I’m using quality materials and a variety of subjects.

“Salamanca Hillside”, is my (historical) interpretation of what existed at the Hobart (Tasmania, Australia) waterfront now called ‘Salamanca’, home of the iconic ‘Salamanca Market’, a big tourist attraction every Saturday. There is a former quarry behind the market site where landfill was taken to establish the port of Hobart. What is unique is the ‘black Sun’ hovering overhead, actually a convict leg iron, a reminder of the state’s cruel history, not only concerning its early penal system, but the way the indigenous population was treated. 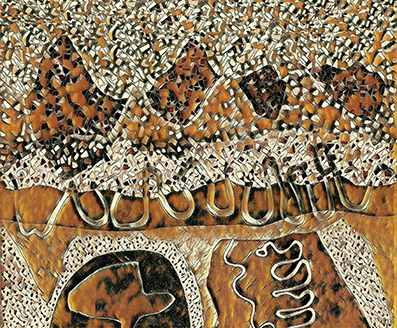 “Ancient Landscape” (48 x 60 cms) is a work in progress and was inspired by the landscape around Coffs Harbour, to the north of where I live.

It’s early days and time will tell where this new journey will take me.

12 Responses to THE CHANGE IS MADE