GOING WITH THE FLOW 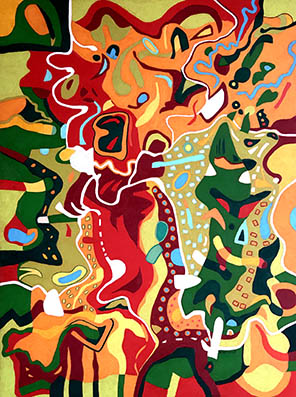 Last week I spent 4 days at Coffs Harbour on the mid-North Coast of NSW. This was my third visit in as many months and each time I had come away with many new ideas for artworks. This time was no exception. I went with a ‘clear mind’, to see what new things I could discover even when re-visiting familiar areas.

I was in the middle of a productive theme based upon the scribbly gum moth and its association with the Scribbly Gum, an Australian Eucalypt. I’d already completed a number of coloured pencil drawings and mixed media pieces that were refreshingly different to my previous artworks. Should I look for more of the same? When I arrived at the Coffs Harbour Botanic Gardens, I decided to wander with ‘fresh eyes’ and see if I could spot something different than what I had seen (and documented) on my previous visits. I did.

One of the firsts things I noticed was the reflections in the water as it tumbled over the side of a large fountain. It was mesmerizing. I set my camera to ‘sports mode’ and proceeded to take a series of photos of the images that could be seen in the tumbling water. That led to another idea of floating objects and reflections in some of the watercourses and ponds in the gardens. I had a ball.

I came away with a wonderful array of images; grist for the mill!

When I got back to my studio, I was ready and well-armed to tackle a new series of drawings, but before that I needed to complete a couple of earlier works that I had short-listed for my exhibition next February in Tasmania. One of them was the drawing featured in this post. “An Convenient Denial”, is a commentary about our government’s failure to take positive action on climate change. I hold strong opinions on this subject. As a landscape artist, I have seen first-hand what is happening to the Australian landscape and it beggars belief that despite constant warnings from scientists for years, there seems to be little action to address what is happening.

I believe that the Labor Party lost the last Federal election due to their introduction of a carbon tax. Guess what? It won’t be long before it’s re-introduced, probably named and packaged differently.

Art is an excellent vehicle for ‘illustrating’ one’s feelings.

And what has today’s featured drawing got to do with global warming?

The climate in cool temperate Tasmania has been undergoing change for at least a decade. It’s getting warmer and in some parts raining less. Irrigation has been a boon for some farming areas, but is there enough water to meet the new demands?

This drawing is of a chaotic Tasmanian landscape being ‘fed’ to produce new and exciting crops in areas where such agricultural practices where once unheard of. Colours that were once alien are now the norm, as are the resulting shapes and land patterns.

Is this move visionary or the beginning of a journey that will see parts of Tasmania’s landscape self-destruct as the salt table rises? Time will tell.

Details from “A Convenient Denial”.

While I was completing this drawing, another idea came to me, then another and another. It seems that the ‘new’ ideas that I had brought back from Coffs Harbour would have to wait.

I need to ‘go with the flow’, that’s what the creative process is all about.

2 Responses to GOING WITH THE FLOW