ALONG THE PIONEER AVENUE (Tasmania, Australia) 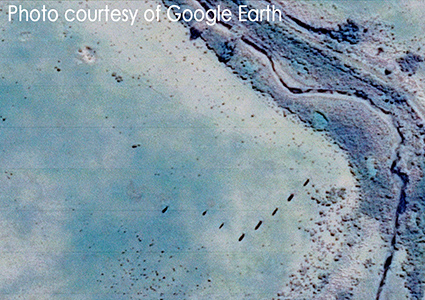 Like many Tasmanians and tourists alike, I’m fascinated with a group of 8 Roman Cypress trees that can be seen on a small plateau (Hyland’s Flat), just south of Conara in Tasmania’s Midlands. Against the surrounding landscape they appear rather alien and the fact that they have survived for 60 years is in itself something to celebrate. The trees were planted in the Spring of 1939, part of an ambitious project that resulted in the growing from seed and planting (in groups, not continuous) of over 6,000 trees (almost 100 varieties from around the world were initially chosen) along the Midlands Highway between Hobart and Launceston as a memorial to the state’s pioneers. Only the strongest trees survived the climatic conditions, but many can still be seen along the highway today.

Hyland’s Flat is a stark example of the extremes of landscapes in the island state. More often than not, it’s devoid of grass, but somehow weeds survive and even thrive at certain times of the year. Then there are the 8 Roman Cypress trees that have defied everything Nature can throw at them for 60 years. Only one tree has been (partly) damaged, but it like the others, still remains strong.

It would be true to say that the stand of trees so exquisitely planted, caught my eye first, but it was the landscape that ‘lured’ me into a more thorough investigation. Several trips to the location followed by a walk (with permission) on the land itself, realized a substantial amount of photos and a greater understanding of what I’d been looking at from a passing car for near on 60 years. 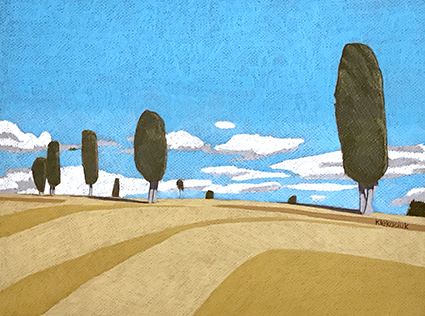 I have begun a series of coloured pencil drawings that will not only feature the trees from a broad range of angles, but will look at the surrounding landscape minus any detail that impairs on the viewing of a ‘pure’ landscape. I call this ‘landscape cleansing’ and it’s been part of my landscape approach for about 12 years. Come to think of it, it’s another reason why I love ‘those trees’ with their manicured look. My first series has a similar palette, but that will change in due course. Next year I will spend time on location at different times of the day and in different seasons to note the change of light and colours of the landscape. I aim to draw more trees from other stands along the highway in coming years.

For my first series I have adopted a horizontal ‘panorama-style’ composition where the trees dominate the composition. Some drawings are devoid of surrounding detail while others reveal the surrounding mountains. It’s late Summer and it’s dry, very dry, but still the trees remain defiantly green and strong. I also aim to produce a series of ‘vertical’ panorama-style drawings that will present me with challenges in structuring the composition as my subject is very ‘horizontal’. Very few will feature the entire group of 8 trees, the emphasis being a ‘slice-like-look’ at certain aspects of the landscape in question. The good thing about thematic work is that it can ‘take-off’ in a variety of directions. I’m looking forward to seeing what I can produce.

I am extremely grateful to Tasmanian Historian, Dr. Marian Walker from the University of Tasmania for her assistance and especially for her publication, ‘The Road to Eden: the Pioneer Avenue between Launceston and Hobart.’

8 Responses to ALONG THE PIONEER AVENUE (Tasmania, Australia)